Donate To Our Christmas Appeal

Home » Donate To Our Christmas Appeal

Please donate to our Christmas appeal

Your Christmas gift can have a big impact on Minnie’s life and the lives of more children like her. 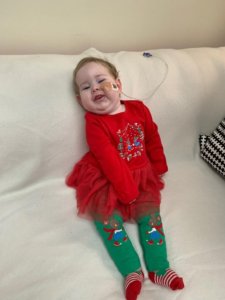 “I remember in the final weeks a lot of friends were asking me whether I was worried about giving birth to which i simply said “As long as Minnie makes it into the world safely it will all be fine.”

Due to my age (being the big 40) it was recommended that I be induced. My first night in hospital went by uneventfully, no real twinges or anything to speak of. When my husband arrived back at the hospital the following morning, I remember thinking that it was going to be a slow process. However an hour later I felt my first contraction and my waters broke”.

“I never imagined at that point that within an hour and a half Minnie would be born”.

“Due to a prolapsed umbilical cord, I was rushed in for an emergency cesarean. When the doctors delivered Minnie, she was not breathing so she had to be resuscitated. I laid there in the theatre in a state of shock, the day I had dreamed of for so many years had turned into a nightmare.

I was willing and praying for my baby to be okay, for us to hear her scream, but that didn’t happen. After some time a doctor told us that Minnie was alive but very poorly and that they needed to take her to the neonatal ward for further treatment.She was briefly brought over to me so I could see her. Through my tears I told her I loved her and then she was taken away.

It was a long four hours before we got to see her again and when we did, we were told that it was unlikely that Minnie would survive and that she was effectively brain dead. It was time to say goodbye”.

But as we are sometimes shown, life finds a way. Even though her brain was severely damaged, Minnie survived. Despite all the anguish, her parents live in hope that something can be done to help their baby. 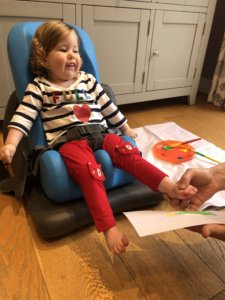 As you can imagine, Minnie’s parents have suffered greatly. They know that she isn’t developing like other babies. She has a very sad and quiet cry. She can’t hold her head up, has little movement and is tube fed. They are desperate to improve her life but we are only able to help Minnie and children like her with your support.

Your Christmas gift of £52 secures an hour of vital specialist therapy. Can I count on you to give 1 hour, 2 hours or even a full day of life-changing therapy?

Every hour counts and will help Minnie get one step closer to the life she deserves.

I can’t imagine that you will give a more important gift this Christmas. your donation will provide a lifeline for Minnie and children like her. Thank you for being there for them, without you they’d be without hope.

With thanks and best wishes for a very merry Christmas, on behalf of Minnie.

Share this page:
Enquire about your child
Back to top