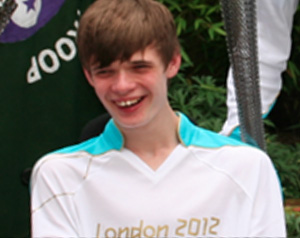 ‘We prayed for a miracle, but it was clear that Charles was not developing as expected.’

“Can you imagine what it is like to be looking forward to your first child to then be told that your lovely baby boy has multiple problems and is unlikely to be able to sit up or communicate?  Feelings of excitement turned to despair, blame and anxiety.  We prayed for a miracle, but it was clear that Charles was not developing as expected.

We felt so alone with our grief and did not know how we would cope with the future.  When Charles was eight months old a community nurse, to whom I am eternally grateful, suggested we should visit bibic.  That was the beginning of a long journey which we are still travelling.  bibic has been my lifeline for most of Charles’ life.

‘Slowly he began to walk short distances, ride his bike, feed himself and to communicate using pictures and objects.’

Supported by family and friends we followed the bibic programme and we taught him to sit, creep, crawl and stand. Slowly he began to walk short distances, ride his bike, feed himself and to communicate using pictures and objects.

In the early days, one of his greatest achievements was to hum beautiful renditions of ‘Twinkle Twinkle’ and ‘Happy Birthday’!

At school he was eventually able to socialise with his friends in a mainstream primary school, supported by a carer.

We visited bibic every six months when Charles was young, where he was assessed by the therapists and his programme was adjusted to take account of his progress, as well as addressing his physical, communication, sensory and learning needs.

Life will never be easy for Charles, but he is a very handsome young man who often smiles, attends mainstream school and enjoys his weekly meetings with his Scout group.  In August 2011 he brought a tear to everyone’s eye when, supported by his friends in the Scouts who pushed his wheelchair, he walked some of the way up Wansfell Pike to raise funds for bibic.

‘he would not be the person he is today without bibic’

I feel indebted to all the bibic team for their understanding, support and guidance over the years.  I am so proud of Charles’s achievements and am convinced that he would not be the person he is today without bibic”.