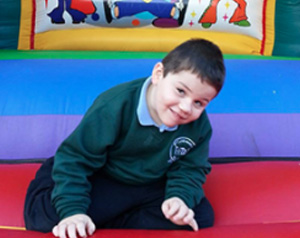 There were some problems during labour and when Lewis was born he looked grey and blue. He was a poorly little man and spent a week in the special care baby unit. During that time I noticed his head was getting bigger, day by day. I knew then that something was wrong.

We went for an ultrasound scan which showed a large amount of fluid in his brain. He needed an urgent MRI scan. I fell to the floor, sobbing. He was rushed to Frenchay Hospital where he had an operation to drain the fluid from his brain. We felt sick with despair. Totally devastated with the knowledge that this would affect him for the rest of his life.

The neurosurgeon told us that Lewis would grow up to be wheelchair bound and would have to depend completely on us for everything.

‘I can’t do this, I can’t cope, screaming and crying.’

The next thing I remember was calling my mum, saying I can’t do this, I can’t cope, screaming and crying, I was living a nightmare. My mum said ‘you can do this’ and that’s when I pulled myself together.

In the next couple of years it was one blow after the other. We found out that Lewis was totally blind and that he had Cerebral Palsy. He started having seizures and was diagnosed with epilepsy. As if that wasn’t enough he had problems with his hormones and he would need injections for most of his life.

Worst of all we were told Lewis wouldn’t live past 7 years old. Having to plan our little boy’s funeral and prepare his last wishes document was one the most horrific things we will ever have to do.

Our family was under so much strain, we could barely cope. Then a friend told me about bibic. Before we knew it, we were in for a two day assessment. This was when our lives started to change for the better.

We finally understood our son and were shown ways to help him, to make his life less stressful. We followed the bibic programme every day, then week by week things started to improve.

‘best of all, he allowed me to cuddle him’

First his terrible dribbling stopped. Then he started to be able to cope with noisy places then, best of all, he allowed me to cuddle him. For so long he could not bare to be touched. The bibic programme includes basic vision exercises and on Lewis’s last visit to the optometrist she was amazed to report some peripheral vision in his right eye!

Because of bibic, life is more manageable. We are so glad we found bibic and can now make the most of the years we have left with our darling Lewis.

Thank you. You don’t know Lewis but you are so kind in supporting bibic’s work which is needed, more than you can imagine. Without you I don’t know what we would do.