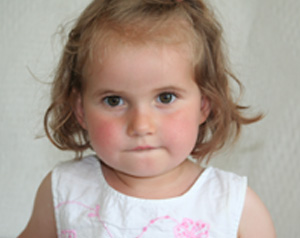 Zoe was just two years old when she was diagnosed with developmental delay and sensory processing disorder. She didn’t seem to be reaching normal childhood milestones, such as walking and talking, and her parents became very worried.

We first said ‘hello’ to Zoe in 2010, just before her third birthday. Our therapists spent a day with her carrying out assessments. These showed her physical skills were at the level of a one-year-old.

‘Simple things like playing on a swing to help improve her sensory responses, playing ball games to help encourage her to take turns and using clear instructions when playing. ‘

We put together a programme to encourage Zoe to have more appropriate reactions to sensations and to help develop her balance and mobility, improve her concentration and fine motor skills and further encourage her speech and social skills. Simple things like playing on a swing to help improve her sensory responses, playing ball games to help encourage her to take turns and using clear instructions when playing.

Zoe’s parents had been carrying out the recommended programme daily and reported huge changes. She was joining in more action and nursery rhymes, beginning to ask questions and using longer sentences.

She had also achieved major milestones in her physical development and was now crawling, pulling herself up and walking, holding on to furniture or someone’s hands. She had even started to crawl up stairs.

Now walking using her arms for balance Zoe is beginning to be confident with different surfaces and gradients. She could climb stairs when supported and could get to standing position alone.

Zoe’s expressive language abilities had progressed really well as she used sentences. Her articulation had improved so that she could produce a good range of sounds and she was able to remember and recite a good range of songs and rhymes. When left to her own devices, Zoe talked almost non-stop to her toy rabbit, although not to other children or adults. Her expressive ability with others tended to be limited to ‘what’, ‘where’ and ‘when’ questions, but she rarely used why’.